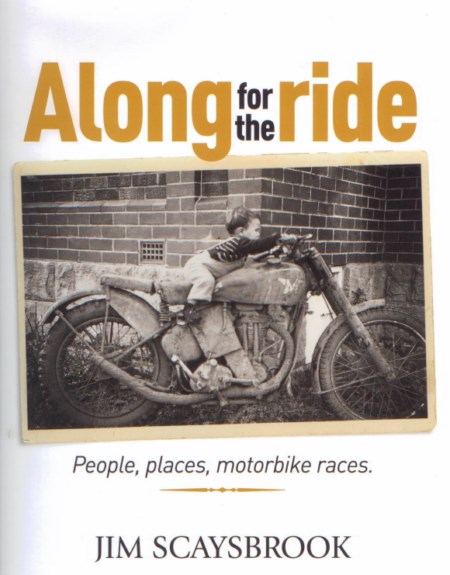 ALONG FOR THE RIDE

ALONG FOR THE RIDE – PEOPLE, PLACES, MOTORBIKE RACES
WRITTEN BY JIM SCAYSBROOK

Along for the Ride is de autobiografie van Jim Scaysbrook.

Along for the Ride’ is the autobiography of Old Bike Australasia editor Jim Scaysbrook. Subtitled ‘People, places, motorbike races’, the 268-page hardcover book is a trip down memory lane, beginning with Jim’s early life growing up in the southern suburbs of Sydney. His father Charlie was a very successful scrambles and trials rider, and both Jim and his younger brother Peter began competing at an early age, initially at Sydney’s Moorebank scrambles track.

In a racing career that has so-far encompassed 49 years, Jim has competed in virtually every form of motorcycling competition, including three times at the Isle of Man TT, and had a spell in Formula Ford open wheeler cars. He spent 25 years as a writer and creative director in the dog-eat-dog advertising industry, where he worked for many of the top agencies. Jim has written ten previous books, eight of them on motorcycling, and in 2006 founded Old Bike Australasia magazine, which has grown to become the biggest classic motorcycling magazine in the Southern Hemisphere. ‘Along for the Ride’ contains hundreds of photographs, many of which have never been published before.

Along for the Ride was many years in the making – the toughest assignment Jim has ever undertaken, but also the most rewarding. It’s a collection of memories covering 65 years, full of larger than life characters, travel tales and an entertaining snapshot of Australian life.