View Cart “MOTORRAEDER BERUEHMTE KONSTRUKTIONEN BAND 3, 1. AUFLAGE 1983” has been added to your cart. 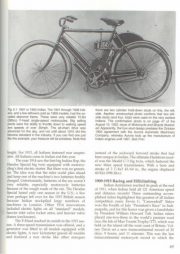 The first 50 years of this century saw the birth of the American motorcycle industry, when hundreds of manufacturers tried to capitalize on the burgeoning market for motorized transport. Dominating the market were ‘the big three’, Harley-Davidson, Indian and Henderson, located in Milwaukee, Wisconsin, Springfield, Massachusetts and Chicago, Illinois, respectively.
Today, many American marques are collected and restored. Well-known motorcycle expert Jerry Hatfield identifies the models of each manufacturer of the early- to mid-20th century, including all Harley-Davidson and Indian motorcycles to 1936, Excelsior Xuper-X and Henderson motorcycles. More than 130 other marques are also detailed, including Ace, Cleveland, Crocker, Cyclone, Flying Merkel, Neracar, Reading-Standard, Sears and Yale.

The book is used, but it is in a very good condition, soft cover, 160 pages, English text.