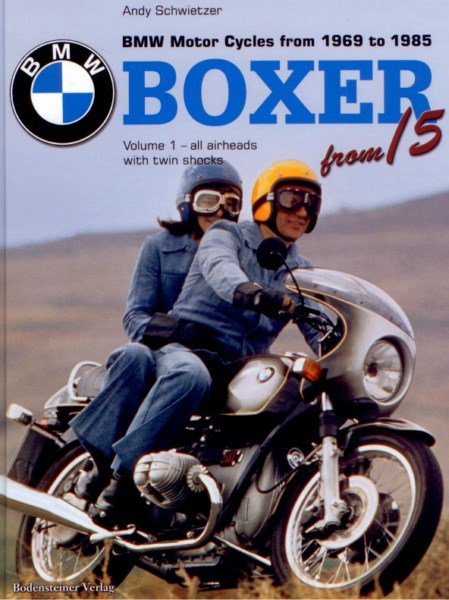 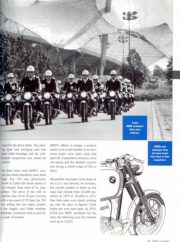 This is the English translation of the first volume of a two-part publication about BMW’s two-valve boxers air cooled “Airheads” (see below).
Volume 1 covers all models with twin shocks.

Over 30 years ago, a unique success story began with BMW’s first /5 models. It came to a close with the final R 80 GS Basic in 1996, after 250,000 models had left the assembly lines. Volume 1 covers the /5, /6 and /7 series extensively. In addition the following, built before 1985, are mentioned in detail: R 90 S, R 45, R 65 and R 65 LS as well as R 80 RT, R 100 CS, R 100 T, R 100 RT and R 100 RS.
Never before have technical details been presented as thoroughly as in this book. It includes a complete set of colours and equipment details. The numerous, and often invisible, changes and adjustments made by BMW during production have been listed meticulously. In addition, there is a complete list of frame numbers which is linked to the introduction of the changes. Advice on buying and refurbishing airhead models is also given. A separate chapter deals with models built for the U.S. market.

CONTENTS :
A unique company history
Modernising traditions … The development of the /5 series
BMW sticks with motor cycles ! … The BMW /5 models
BMWs Pop Art Boxer … The BMW /6 models
The man-machine philosophy … The BMW /7 models
Shadow boxers … Series 248 R 45, R 65 and R 65 LS
Moving into the second decade … BMW two valve models since 1980
Werner R. Reiß : History of evolution … Technical changes and modifications through production series
Colouring games … All colours and codes for airheads with twin shocks
As you like it … A few words about each model
Buying second hand … A close look at two valve BMWs up to 1985
Numbering games … Technical data
All frame numbers
Airhead models in the U.S.A.