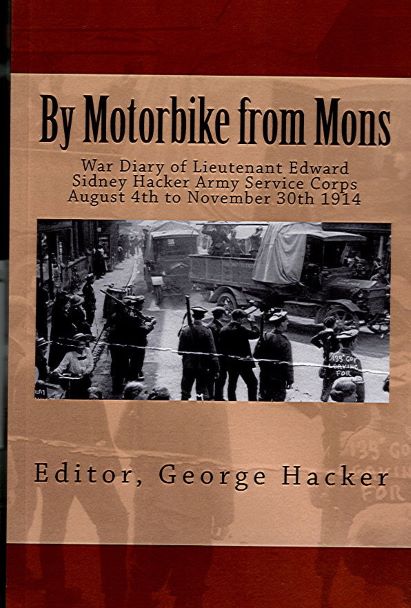 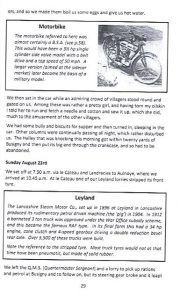 BY MOTORBIKE FROM MONS

World War 1’s Centenary Year has brought to light a large number of war diaries, but this is one that is different, if not unique, in its contents. It tells the story of a mechanical transport company supplying a cavalry brigade with ammunition for its horse artillery. Mechanical transport was a new branch of the Army, and there are very few eye-witness accounts of what it was like to be involved with it in those early days. So readers will be able to picture what it felt like to drive a lorry with no windscreen and solid tyres, as it jolted over the French pave in all weathers – not to mention the accompanying dangers from breakdowns, fires, bombs and shells, and of course the advancing Germans who were never far away.
The diary will also delight those with a mechanical bent, with its descriptions of how to mend cracked cylinders, cannibalize spare parts from ‘duds’, and all the other improvisations which seem to belong to a different world. And for the serious researcher there is the light which the diary throws on the whole matter of how mechanical transport was used in those early days of the War.