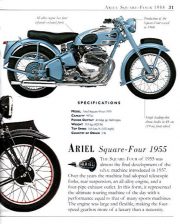 A superb collection of over 300 mean machines.

The complete pocket guide to the world’s most amazing motorcycles. “Motorcycles are the smell of methanol fumes at a speedway race, the sound of a v-twin being gunned around the banking at Daytona…” Fast and fierce machinery. This remarkable A-Z directory has been painstakingly compiled by one of the world’s leading authorities on classic bikes, Hugo Wilson. Over 300 of these metal masterpieces are featured, from the spectacular Norton Manx complete with its famous “featherbed” frame to the revolutionary styling of the BMW K1. Each bike is superbly shot and contains a detailed historical profile and key information from capacity to top speed. Judge for yourself whether each machine deserves its fifteen minutes of fame.