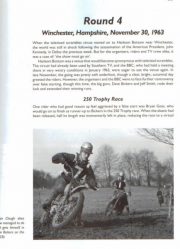 In the 1960s motocross became a TV phenomenon! At its peak, the BBC TV Grandstand programme was watched by millions on Saturday afternoons throughout the winter: it became a sensation for spectators and riders alike. This is the story of the races and riders and how motocross came to be such a huge success on TV.
Motocross On AIR! covers the complete series of races from their inception in 1963 to the end of the series in 1970. There is a full description of how motocross got started on the TV, the people and characters involved – including the ever popular Murray Walker! Each and every race is described in detail in a way which fully reflects the challenge, excitement and fun of the racing itself – a real walk down memory lane. Motocross
The Grandstand Trophy was, next to winning the National Championship, by far the most prestigious motocross competition in the country – it gave both riders and the motorcycle manufacturers the oxygen of publicity! The Grandstand Trophy attracted the best racers of the day including Jeff Smith, Dave Bickers, Chris Horsfield, Vic Eastwood, Derek and Don Rickman, Dave Nicoll, the Lampkin brothers (Arthur, and Alan), John Banks, Alan Clough and many more, they all shine through on these pages. With their skill and courage, they in turn mesmerised and inspired a whole new generation of motocross fanatics.