View Cart “HARLEY-DAVIDSON DE LEVENDE LEGENDE” has been added to your cart. 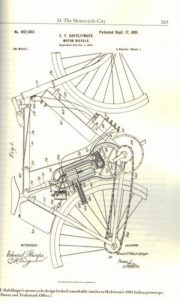 Robert M. Keating’s story is America’s story. Born in Springfield, Massachusetts, in 1862 to poor Irish immigrants, he was just 13 when his father died suddenly. A precocious boy with a knack for mechanics, Keating filed his first patent at 22, started his own bicycle company at 28, and at 32 was producing one of the most innovative bicycle lines in the world in a state-of-the-art factory.

Along the way he flirted with baseball, briefly playing in the major leagues and patenting the game’s rubberized home plate. In early 1901 Keating developed and marketed a ground-breaking motorcycle before either Indian or Harley-Davidson, and later successfully sued both companies for patent infringement. His company also manufactured automobiles beginning in 1898, producing both electric and gasoline powered vehicles. At the time of his death at 59, Keating held 49 patents—everything from bicycle and motorcycle designs to lunch-chairs to a modern flushing device for toilets.
This book tells the story of Keating and his Keating Wheel Company, a Gilded Age story of unbridled inventiveness that encapsulates America’s transformation into a society that would forever move on wheels.

CONTENTS :
Part 1. Beginnigs
Part 2. Holyoke
Part 3. Middletown
Part 4. Motors and Mayhem
Part 5. Collapse
Part 6. What might have been
Part 7. Return to Springfield
Appendices :
A. The Keating Wheel Company Officers and Members of the Board of Directors
B. Robert M. Keating’s Patents, 1884-1920
C. The Only Original 1901 Keating Motorcycle known to exist