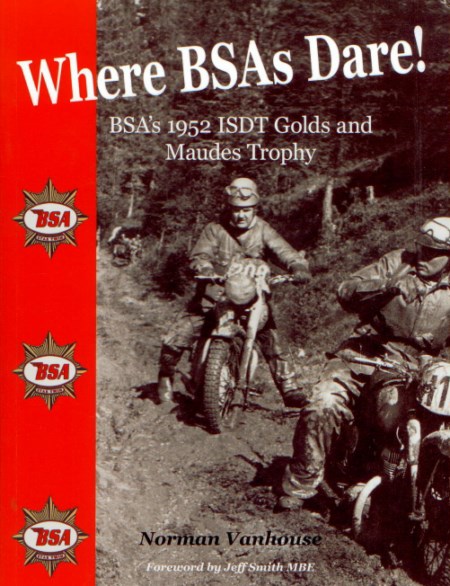 In 1952, BSA wanted to publicise their new 500cc Star Twin. So what better way than to set the bike a nearly impossible task? They took three standard BSA A7 bikes, and, under Auto-Cycle Union observation, rode them to Austria, entered the 1952 ISDT (International Six Days Trial), considered the Olympics of endurance motorcycle sport at the time, won three Golds, then rode the same bikes north through Germany, Denmark and Sweden to Oslo in Norway where they undertook a speed test knocking up over 80mph on each bike whilst on low gearing suitable for the ISDT in which they had just competed – and all this in just over three weeks and mostly in unrelenting rain! Then they rode the same bikes back to Birmingham!

This dramatic and compelling story is told by Norman Vanhouse, one of the three riders involved, and really gives a feel of what it must have been like. This feat of endurance and reliability of both man and machine is probably still unmatched in the modern era. The book also includes a history of the Maudes Trophy itself from 1923 to the last attempt to win the Trophy in1994, which provides some amazing perspective to this legendary story.  A joy for all BSA owners, especially those with a BSA Star Twin, motorcycle trials riders and other enthusiasts who relish motorcycle travel and adventure. And of course a compelling read for all!

INHOUD :
Summer 1952
Across Europe
Behind the Iron Curtain
The International Six Days Trial
Up to Scandinavia
The Speed Trial
Claiming the Maudes Trophy
What happened next
Maudes Trophy History